This is a companion piece to our article on buying Arkham Horror, and is updated as of July 2021.

Marvel Champions is a highly successful co-operative card game in a similar vein to Arkham Horror and Lord of the Rings. While missing some of the campaign depth of Arkham Horror, it makes up for this with it's quick setup and accessibility. It works very well solo and two-player (playable with up to 4), so has been very popular during lockdowns.

FFG have worked hard at making it easier to purchase than other Living Card Games, but it can still be a little confusing.

Broadly speaking, one product gets released a month (though pandemic logistics have caused some delays).

Generally, availability for Marvel Champions has been fairly good, with some hiccups at various stages of the pandemic. Initial stocks have sometimes been allocated, so if you are keen to get a particular thing in a timely manner, it is worth placing a pre-order with your Friendly Local Games Store.

However most reprints have come out fairly quickly, and you will be able to buy most of what you want when you want it. This is in stark contrast to Arkham Horror, where availability is pretty sanity-draining.

FFG are fully committed to this game. Even if something is out of print or hard to find right now, it will come back. Don't overpay for anything on auction sites - patience will bring you what you want. The Marvel Champions core box is much more generous than previous LCGs (And this is reflected in the price). There are enough cards in here to play. straightaway, with up to 4 players. There are 5 Heroes (Spidey, Iron Man, She-Hulk, Black Panther, and Captain Marvel) to choose from, and enough cards to have 4 decks. It even contains a suggested card list for the Heroes. There are enough of the basic cards to deck-build properly in the future. With some LCGs, it is received wisdom that you need two core boxes.

You do not need a second core box in Marvel Champions!!!

People coming to MC from other games are sometimes a bit disbelieving of this, but there are enough of all the cards you need in the core. Honestly, don't get a second box unless you want to have permanent pre-made decks for friends - that's the only reason.

However, it is the case that you will only be able to do very little customised deck-building with just the core box. This brings us to another of the different things about Marvel Champions;

You don't have to deck-build in Marvel Champions!!!

You can deck-build (and I do), but it is not necessary. Pre-built packs are sufficient to allow you a fun time playing with a decent chance of winning at the Standard level. If you want to go Expert (or harder) you will probably need to deck-build, but again; one core box is plenty.

There are three villains in the Core Box - Rhino, Klaw, and Ultron. You can mix these in either Standard or Expert mode along with one (or more) of 5 different modular encounter sets. These encounter sets can be mixed with pretty much any Villain to give you variety to beat. 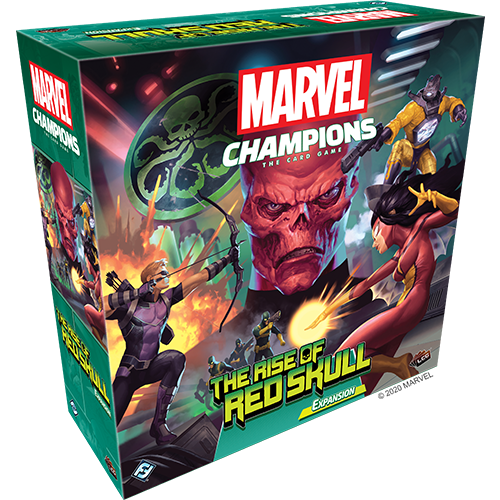 Marvel Champions does not have Cycles or Campaigns in the same sense that other co-op LCGs do. With Arkham Horror, you would need to buy a deluxe box plus 6 mythos packs to enjoy a full story - that strict narrative order doesn't exist in MC.

An entire (much simpler) campaign is included with;

In Rise of the Red Skull, the Heroes are Spider-Woman and Hawkeye, and the villains are; Red Skull, Taskmaster, Absorbing Man, Zola, and Crossbones.

Essentially, this gives you a story arc (with mini-comic) to include 5 linked chapters. There are 8 cards specifically linked to this story.

In Galaxy's Most Wanted, the Heroes are Groot and Rocket Racoon, and the villains are; The Grandmaster (twice), Drang, Nebula, and Ronan. There is more of a campaign feel; you will earn Credits at the end of each scenario and buy more cards. GMW is considered to be much harder than any previous content. It is not recommende as an early purchase; Rise of Red Skull is probably a better 2nd buy after the core box. Scenario Packs are odd things. They are about 80 cards, and contain a villain (or group) and one or two scenarios. This is so far - each of the three packs we currently have has been quite different. It's important to note that these packs contain *no* hero cards, so even if you are a completist don't get these for their hero cards, you'll be disappointed. Equally, though, they don't need many other cards - just turn up with an encounter set, the Standard cards, and a Hero and you are good to go.

The Wrecking Crew Contains 4 different villains who take it in 'turns' to be the active villain. This is mechanically interesting, but none of the villains can be used elsewhere, nor are there any modular sets.

The Green Goblin Contains only one villain - but Norman Osborn and the Green Goblin can flip back and forth like Heroes can. It also contains four modular sets that can be mixed with other villains. There are two scenarios, one focused on Osborn, one focused on the Goblin; the first is considered much easier than the second.

The Once and Future ﻿Kang contains only  one villain - Kang himself - and one scenario and three modular encounter sets which can also be used with other villains.  I don't want to spoiler it so won't say more - one at least of the reveals is an OOOOOOOOOO moment. Each Hero Pack contains 60 cards. 22 of these are the Hero themself (Including the nemesis and obligation. Roughly 25 are cards that are included make up the the complete Hero deck. Most of those 25 will be brand new cards for a single Aspect, but a few will be reprints of core box cards - particularly the neutral Resource cards, which have come in every deck so far.

This means that you can buy a Hero Pack of your favourite Hero on the way to a friend's house, turn up, open it, and play! This is a great way to play casually in our opinion, and a major part of why Champions is so accessible.

Finally, each Hero pack will have around 12 new cards from Aspects different to the one that came with the Hero.

Unless you really want to get into the deck-building aspect of things, we don't advise paying too much attention to the aspects that come with each Hero; just buy the ones you like.

However, if you are interested in deck-building, then it's worth knowing which Hero comes focused on which aspect;

*Spider-Woman and Hawkeye come with the Rise of the Red Skull. Rocket and Groot come with Galaxy's Most Wanted.

**If you want to buy in release order, earlier releases are at the top of each column
***Gamora has three cards each from Justice and Protection

There are various elements you can buy to bling out your game. None of these is necessary, but range between nice to have and just lovely;

We highly recommend that you purchase and then play before purchasing more. This stuff won't go away, and it's better to learn slowly than swamp yourself with a huge card pool. Our recommended purchasing order would go something like this;

We recommend buying from your local game store - that's where you will also find a community of other players. If that happens to be us, or if you don't have a LGS, you can buy from us here.

Also in Investigating Insanity and Smashing Supervillains - an LCG blog

Buying the Mythos - An Introduction